The Versatility Award is announced by the Norwegian Bernese Mountain Dog Club, and is given to a BMD-equipage which can show for achievements in at least three different disciplines, and has contributed to showcasing the breed's versatility in a positive way in the public sphere. The award can only be won once by a BMD, and will not be awarded anyone if nobody is deemed worthy by the jury. This is the fourth time this award has been given out. I tried to win it twice with X'en (Xkumle X-Faktorer av Hiselfoss), but had to see us beaten by better dogs and owners. But her daughter Foenix managed to go all the way!

This award is won based on achievements and participation for the period 01.01.2015-31.10.2016. Within this time frame, Foenix passed the beginner's test in obedience, she made her official debut in obedience class 1, she was club champion in obedience class 1 for 2016, she made her debut in rally-obedience, she managed two first prizes in rally-obedience, she gained four CACIBs and the international title, and she won three CACs in three countries, she's been trained in search for objects and tracking, and participated in working camp.  Within this time frame she's even been a brood bitch, and it's a fact that it's more difficult to combine active competition life with breeding. The day only has so many hours, and to me it's essential that a bitch is particularly physically fit before and after a litter, and thus we spend even more time on physical exercise during immediate puppy plans, pausing the working activities temporarily.

I'm proud of what Foenix and I have achieved together, and we still have goals and ambitions on the competition field to work towards, so we're not retiring although we won the Versatility Award for 2016! 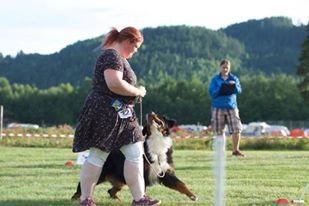