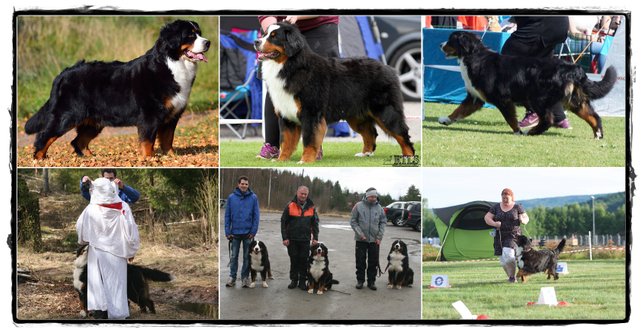 It's a true joy summarizing 2016. Even if we've had our sorrow, obstacles and unexpected drama, I'm still gonna count 2016 as an adventurous and magical year. It's a year where I took a lot of chances and truly believed in myself, and it paid off.

CIB RL1 Latrudas Foenix From the Ashes (Se Fin Ch. Berntiers Opus One - JWW-08 Nord.JW-08 BH Xkumle X-Faktorer av Hiselfoss) was the source of some ambitious and harebrained dreams this year, and I'm still on cloud number nine after she landed her international title in September by winning the last three CACIBs within seven days in Croatia and Hungary - that's what I call a hat-trick! She also won CAC in Croatia, Hungary and Norway, and is qualified for Crufts 2017. She landed the beginner-title in rally-obedience, whereas in obedience - which was only fourth on our priorities this year - she ended as number 3 on the most winning-list for obedience class 1 in the national breed club. She won the club championship in the same class in May. For 2017 our only hope is that she can give me the H-litter which tragically died from us during Easter.

Goldbear's Adam Lambert (CIB JoyEurope vant' Stokerybos - Xantran Endearing Eudoxia) has had an amazing year as well. He didn't make his junior debut until May at 13 months of age because I was too occupied with our litter-drama, so despite his shortened show season and young age, he managed to grab a 12th place among the 48 most winning males in the national breed club, where only results from being placed in the best male-competition give points, so a lot of his huge class wins and other major results unfortunately don't count on the list. He's gotten the 2 CAC he's allowed to get in this country, along with a CAC in Hungary, junior-CAC in Croatia, and he's qualified for Crufts 2017.

To top it all, he was x-rayed on his first birthday with A in all four corners, and at 17 months of age he completed a very nice mentality description. He's qualified for breeding according to the Norwegian breed club's guidelines.

Latrudas Get Lucky (Kjær's Fernando - CIB RL1 Latrudas Foenix From the Ashes) has had a nasty tendency of dropping her coat whenever I've thought of showing her, and she ended up being shown at one single show in June this year, so naked that it was indecent - but still she managed to snag a CAC, and got qualified for breeding that weekend.

In January we got the x-ray results back from the entire G-litter, and I'm so proud and happy that the trio got 12 A's as a result. In May they completed their mentality descriptions at 17 months of age, and there are so many nice qualities in this litter, albeit their bodies mature slowly. I'm excited about their future, and hope I can add at least one of the girls to my breeding plans.

I don't expect 2017 to top this, but I'm gonna do my darnedest to try and have fun doing so, staying true to my integrity and values, and shaking off the poison that's been clinging to my life for too long.

Thank you to everyone who's been an important and valued part of 2016!